Configure a web app running a linux container, integrating the back end into a vNet so that the application can access the private endpoint for the SQL DB.

The private endpoint microhack covers accessing the frontend of PaaS services and integrating those with virtual networks. You can do exactly the same with the Premium SKUs for web apps, creating private endpoints which are great for providing internal apps to companies rather than using ASEs.

That is still the Private Link functionality, so what is vNet Integration?

Many web apps are standalone and self contained, but a common application pattern is to have the web app as the front tier for an app, but the outbound traffic then punches through to a public database, or into a logic tier that runs in VMs or APIs running on containers. This outbound, or backend traffic is usually public, but you can integrate the backend of the web app with a vNet using Regional vNet Integration. This is useful regardless of whether or not you have used Private Endpoints for the front end.

Note where Private Endpoints and vNet Integration are on the web app networking overview screen: 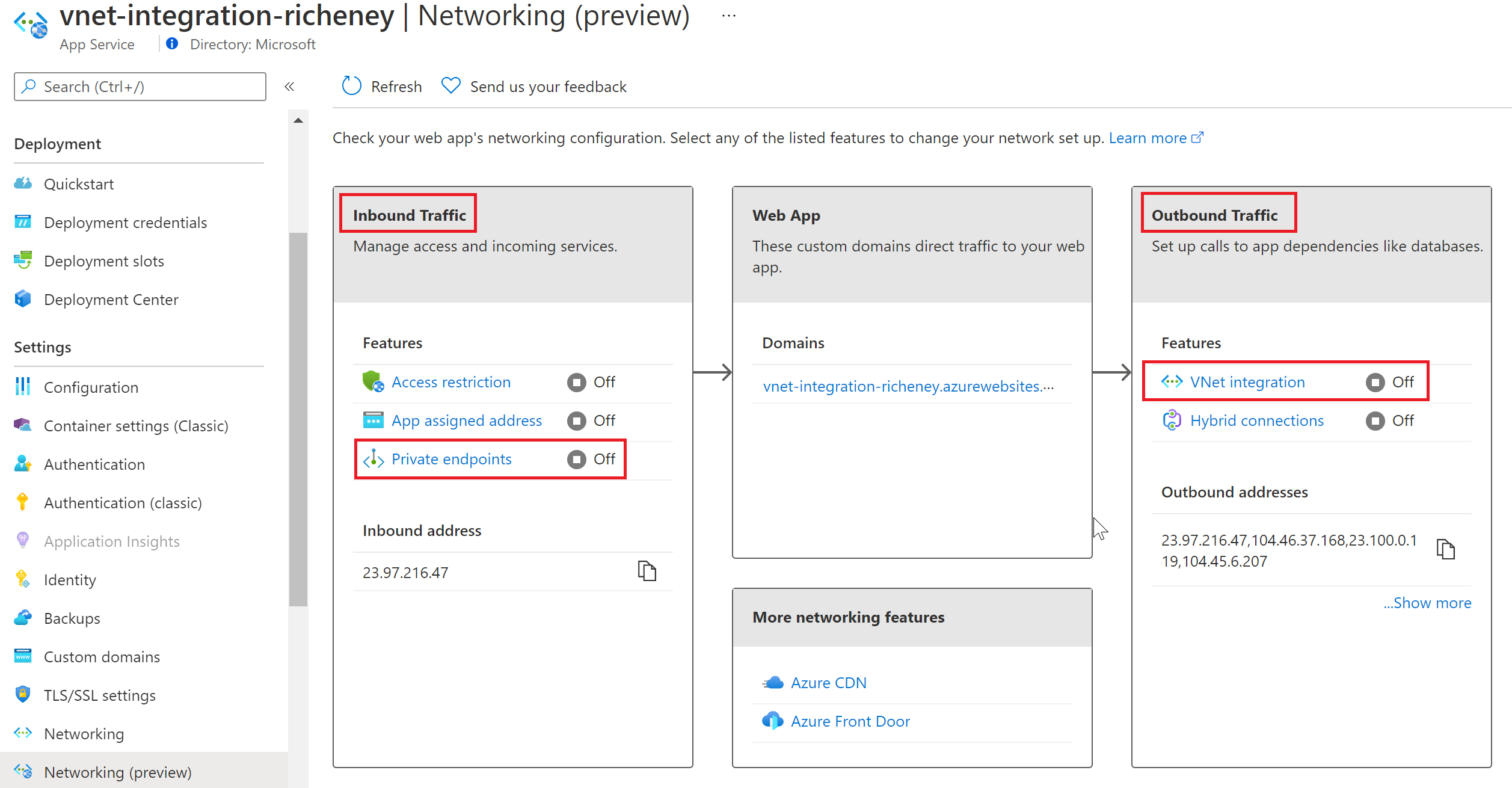 In this lab we will stand up a simple linux web app running the Inspector Gadget container image. The image gives us a wealth of useful information plus the ability to connect to SQL databases. We’ll initially show that cannot access the SQL database from the private link microhack as the public endpoint was blocked following the creation of the private endpoint.

We will integrate the app into the vNet and then connect to the SQL database’s private endpoint.

Finally we will cover a couple of key environment variables and the effect that they have.

This lab uses CLI commands in a Bash shell, but you can also follow the Portal screenshots and instructions if you prefer.

This lab is an addition to the main Private Link microhack and you will build on that environment.

If there is interest then we will create a short script to re-generate enough of that environment to make this lab standalone..

This will show a string without the username and password.

Manually add in your SQL username, AzureAdmin and your SQL password to finalise the string.

Save it as you’ll need it later.

Set location to the region used in the private link microhack environment and use it consistently throughout the lab.

The commands above set temporary environment variables to default the resource group name and location. This shortens the following commands.

Use the Inspector Gadget linux container in a Premium V2 P1v2 web app.

Use the Premium V2 or Premium V3 SKU for vNet integration. Or the Standard SKU but only from the newer App Service scale units. Note that Standard supports vNet integration for the back end, but you need Premium if you also plan to have private endpoints for the front end.

Ensure that your web app has a unique FQDN. Don’t use -richeney in your app’s name! Throughout this lab you will see -richeney used as my identifier, so make sure that you change this to your own identifier for uniqueness.

OK, we’ll check the default behaviour before we integrate with the vNet.

Browse the homepage for your web app, e.g. http://vnet-integration-richeney.azurewebsites.net.

Across the top you will see a number of gadgets. We’ll start with DNS.

Click on the DNS tab at the top of the Inspector Gadget webpage.

This nslookup should return the public IP of the SQL databases’s public endpoint.

Click on the HTTP tab at the top of the Inspector Gadget webpage.

Curl the default page, http://ipinfo.io/ip. This page will display the source IP address, so you know where the traffic is coming from.

OK, let’s confirm we cannot connect to the SQL endpoint.

Click on the SQL tab at the top of the Inspector Gadget webpage.

If you then click on the Submit button then you should see an error as we have previously blocked access to the public endpoint. The error will include the following text:

The vNet Integration feature requires a dedicated subnet. When you integrate using the CLI then you create an empty subnet first and then integrate the app with it.

First, search the environment variables on the Inspector Gadget homepage for WEBSITE_PRIVATE_IP. It should not exist.

Now add the new subnet into the same vNet as the SQL server’s private endpoint.

Note that vNet integrated apps can route to any subnet in the vNet, or to those in peered or vNet Gateway connected vNets. They cannot route to on prem via ExpressRoute or S2S VPN connections.

If you are using the older Service Endpoints (rather than Private Endpoints) then they should be configured on the vNet integration subnet as service endpoints work at layer 2.

Update the web app to integrate with the subnet:

Recheck the environment variables. (You may need to allow a moment for the site to recycle, and then refresh the Inspector Gadget homepage.)

You should now have a WEBSITE_PRIVATE_IP env var with a value at the end of the subnet’s usable addresses, e.g. 10.1.1.62.

The web app’s DNS will be set to match the vNet’s DNS by default. If you are just talking to VMs or other private IPs in your vNet then you are fine.

Retest the SQL and DNS gadgets. Has anything changed?

As always with Private Link, you need to ensure that DNS is resolving the FQDN for your PaaS service to the private IP of the private endpoint.

Time to introduce a couple of important variables to get this to work for the SQL private endpoint. We’ll add them in one by one and see the impact.

Run the HTTP gadget. It should still return one of the web app’s outbound IP addresses. The ipinfo.io website is on a public IP so this is as expected.

All egress traffic from the web app is now going through the virtual network and is subject to the routing and controls that we can use. To demonstrate this we’ll temporarily add a NAT gateway to the subnet. All outbound traffic from the subnet will go through the NAT gateway’s public IP. You do not need a NAT Gateway for vNet integration, but it is a great way to prove where the traffic is emanating from.

NAT gateway’s are useful if you ever need to have control over the outgoing IP address, notably for customer allowed lists.

You should now see a different address, matching the public IP on the NAT gateway, proving that non-RFC1918 traffic is no going through the vNet.

If you want to remove the NAT Gateway then run the following:

The DNS gadget will resolve to the public endpoint IP address.

Note that the 168.63.129.16 IP address is not part of the RFC1918 address space, which is why you also need the WEBSITE_VNET_ROUTE_ALL=1 environment variable.

Retest the DNS gadget. It will now return the private IP address of the private endpoint instead.

OK, we should be able to use that SQL private endpoint now. 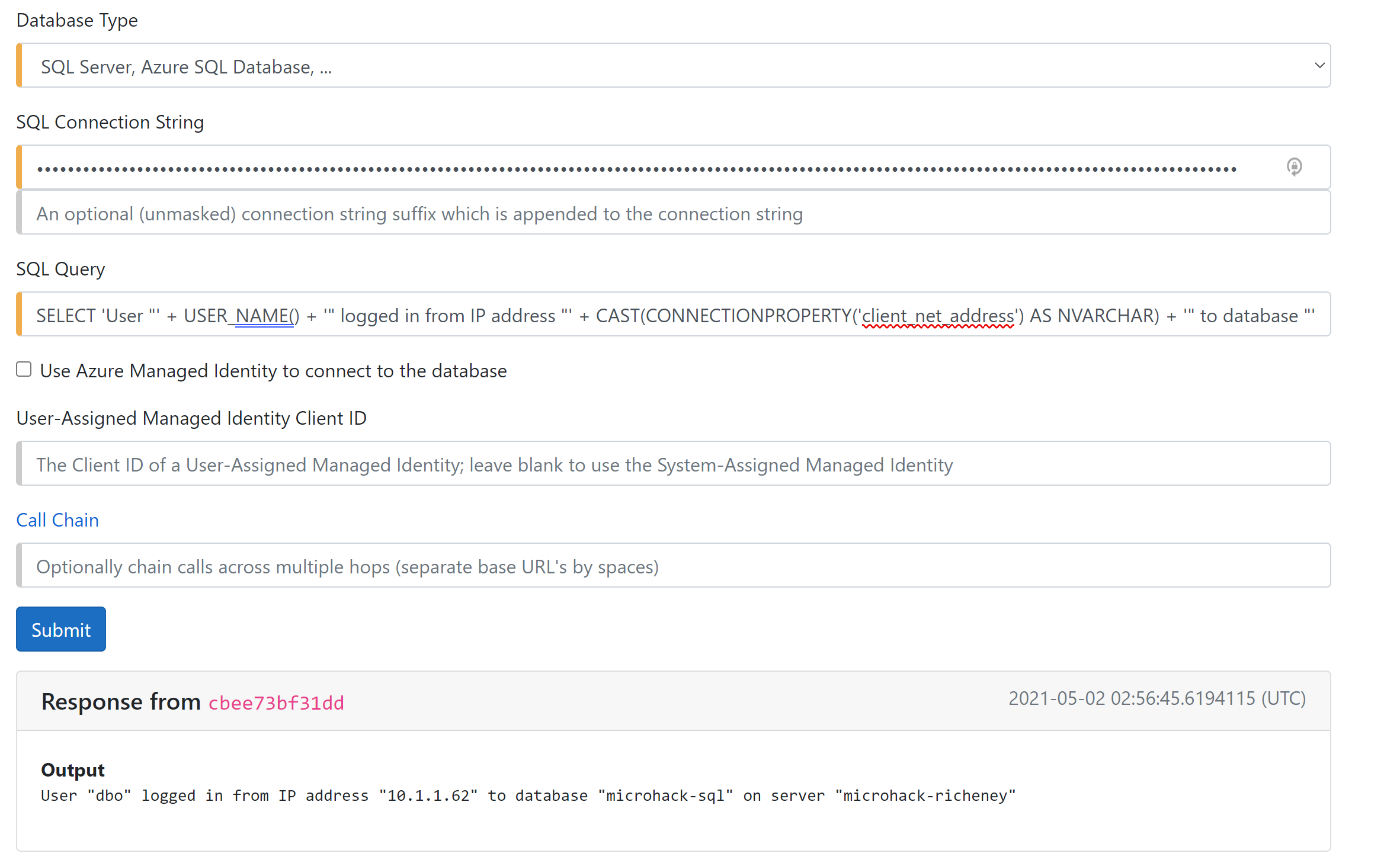 OK, that was the long way round but it is useful to really understand what each part of the config does and how this hands together.

You may delete the resource group to remove all resources for this page.

You may also unset the two environment variables for this session.